Before you wonder if I’ve written at a million miles per hour, it isn’t ‘All Our Tomorrows’ but a collection of short stories I’ve been working at on the side.

‘The Journey and Other Short Stories’  is now available in paperback from Amazon here  – it will also be available in electronic form very soon. 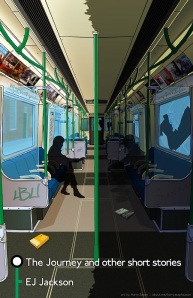 The Journey – young widow Eva King is trying to rebuild her life following the death of her husband and infant son when the train she and fellow traveler Tom are travelling on derails.

When Eva and Tom make their escape from the wreck, they discover that London has been attacked, and that Tom’s wife and two young children are missing. But all is not as it seems…

Gideon’s Road – a man wakes up to find himself lying in a cold country lane. He has no memory of who he is, where he is or why he cannot remember what happened to him.

Taken in by elderly widow Alice, he learns that the world around him has been devastated by a deadly virus, and that very few people have survived.

I Think You Knew My Father – Journalist Marc Harrison gets more than he bargained for when he takes the place of an indisposed rival on the first manned mission to Mars.